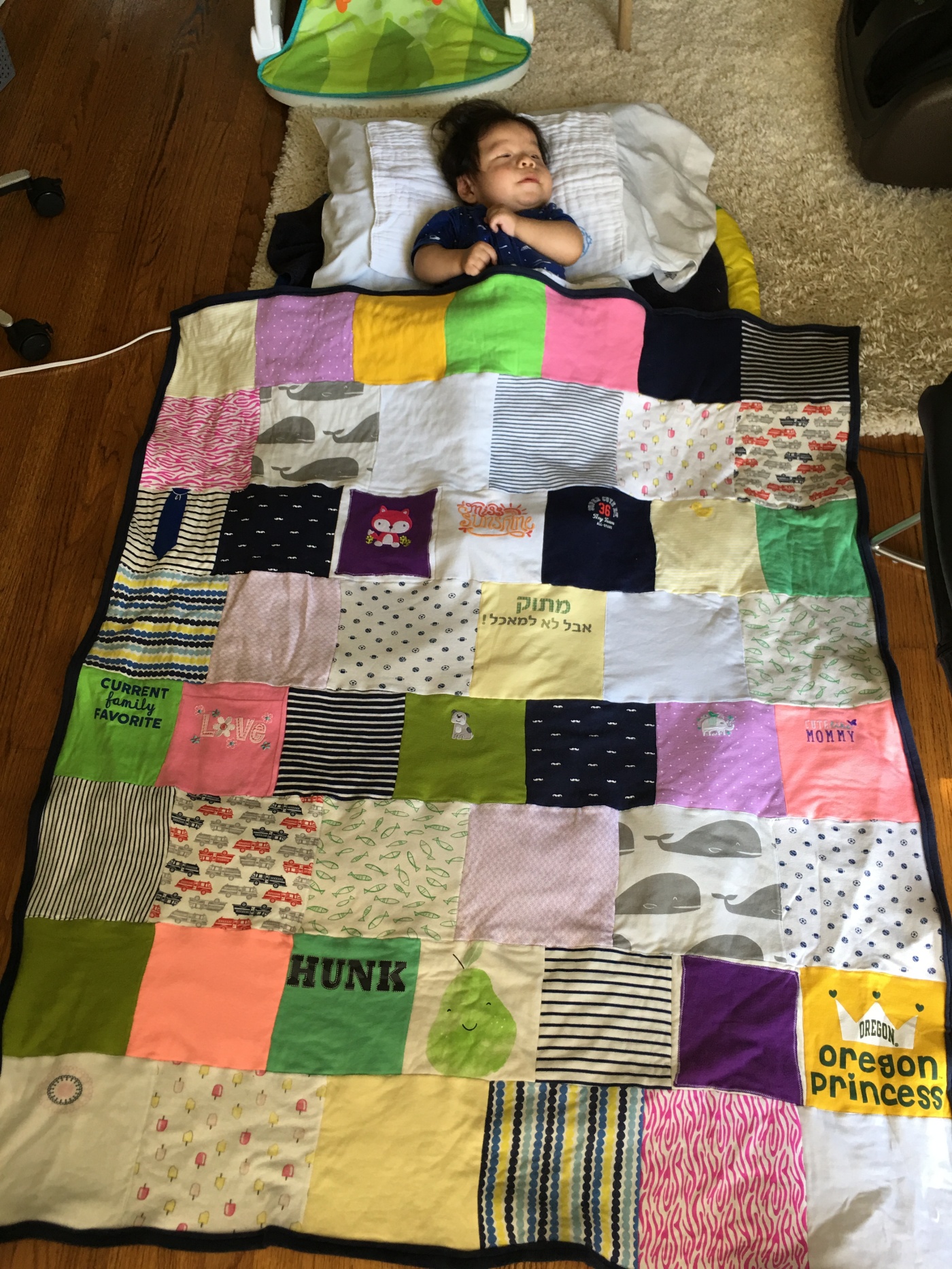 We have been overwhelmed by the response we’ve gotten. To be honest, we wavered about whether we should share anything, and how much. Almost all of the articles I’ve read were about the “after.” How someone recovered from postpartum depression. How someone managed to deal with the tragedy of losing a baby. The lesson or light at the end of a dark tunnel. We don’t know how our story will turn out, but it turned out to important to me to share the uncertainty we’re living in. Because sometimes during the uncertainty is when people really need the support. So thanks to everyone for your very kind words and offers of support. (Thank you also for the people who reached out and shared their own stories.) We recognize this will be a long journey and it all means so much to us.

In the last few weeks, Emmett completed another MRI to see whether the white matter in his brain had improved or decreased (and if so, what rate it is decreasing at). It was neither good news nor bad news; his MRI looked relatively the same as it did back in November. The improvement we were hoping to see from being off steroids wasn’t there, but we also didn’t see any signs of rapid neurodegeneration. For people who are curious about how the experience of these procedures, I thought I’d also describe some of that… I’ll format it a little differently in case you want to skip that part.

MRI (per Wikipedia) is a medical imaging technique used in radiology to form pictures of the anatomy and the physiological processes of the body in both health and disease. MRI scanners use strong magnetic fields, radio waves, and field gradients to generate images of the inside of the body. Emmett had to fast for eight hours before the procedure (and no fluids up to two hours before). Because you need to stay completely still during the MRI, they usually have to sedate him for it. So they put in an IV (which is no easy feat for Emmett… like me, he has small veins) and send us (the parents) away for the next hour. They keep us after the procedure so they can make sure he wakes up okay from the anesthesia, which could be another one to two hours. Once, he spiked a fever after his MRI which meant we were kept for an extra five to six hours. The results are usually available within the next day or two. Aside from the IV and anesthesia, it’s noninvasive and doesn’t subject him to addition radiation, so it’s a relatively benign process.

Through our geneticist, we heard about a clinic they hold in Seattle quarterly for congenital disorders of glycosylation (CDG)… which is what the PIGA mutation falls under. It’s the only one in the U.S., so we got in touch with the doctor who runs it and are in the process of getting signed up for their late April clinic. With the help of one of Steve’s closest friends, we’ve found some potential treatment options to try that all have to do with supplementing particular vitamins/enzymes in Emmett. More on that next time, though we are hoping to start him on pyridoxine (B6) fairly soon. (Once he is weaned off his current medication, Onfi.)

Our doctors are being careful to caution us about getting too optimistic with these treatment options. One, because the route to getting approval could be long and may ultimately be found to be unsafe or too uncertain to try. Two, because there’s no guarantee that any treatment will help reverse the damage that has been done neurologically. But I think we’re just glad that we are at least trying something and not just sitting on our hands waiting for him to get worse.

Last year, I read The Subtle Art of Not Giving a F*ck by Mark Manson and his theories about what leads to a happy life have been helpful as we navigate these challenging times. Manson discusses finding the right things in life to give a f*ck about, things that are in line with your values and that matter. “This, in a nutshell, is what “self-improvement” is really about: prioritizing better values, choosing better things to give a f*ck about. Because when you give better f*cks, you get better problems. And when you get better problems, you get a better life.”

I don’t think this is what Manson would call a “better problem,” but I take it to mean we could be stressing out over stupid stuff… and at least this is a problem that is absolutely worth all our heart and energy. I try to stay grateful because through this, we’ve come to realize that we are extremely fortunate to have the resources we need so that we can try everything possible for Emmett. We have people around us – old and new friends and doctors – who are spending a considerable amount of time researching his disorder and trying to help us come up with the best possible plan. I think the worst feeling would be if we know there’s something out there to try, but we aren’t able to. So my heart goes out more than ever to people out there who can’t get the treatment they need because of a lack of insurance, or maybe because things are getting delayed or done poorly because of all the red tape that exists in health care.

That said, another thing Manson discusses is the tendency for some people to measure their lives by the ability to be positive about pretty much everything. But, he says, denying negative emotions can sometimes lead to emotional dysfunction or avoidance. “Stay positive” and “things will work out” are things many parents in similar situations are often told. And it is important to remain hopeful. But for me, it’s also been important to acknowledge the sadness and anxiety. Someone told me early on to allow myself to grieve and mourn the loss of the typical. We had so many expectations and hopes for Emmett when I was pregnant, and to realize that’s not our reality is devastating. But at the same time, there’s a sense of guilt about those feelings. So giving myself permission to have those feelings (and knowing I’m not a bad mom for having those feelings) helped me process them. It’s a cyclical emotional process I don’t know will ever be resolved, but as cliché as it sounds, I think the best thing for me is to acknowledge and feel the feelings, then focus on the things I can control.

Sorry for my long stream of consciousness post. And THANK YOU again to everyone who reached out to us. ❤ I can’t believe Emmett turns one next month! =O

What’s Emmett been up to? (Click to see captions.)

We got a new car seat and stroller for Emmett since he’s starting to outgrow his infant stuff. Challenge? Getting stuff that offers enough support for his low muscle tone. This is the Maxi Cosi 85. So far, so good!

And this is the Chicco Urban. Thanks to his physical therapist for doing some research on his behalf and recommending this! 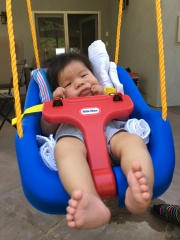 We put a swing up in our backyard. He didn’t hate it. 😉

Steve was out of town for work for a few days so we had to send him daily pictures to let him know how we were doing! Here’s one. =)

Wrapped in love. Some photos from the very lovely gift Emmett got from the wonderful moms in my mommy Facebook group. Onesies from their babies sewn into a blanket. =D The thoughtfulness of the gift made both me and Steve cry! They also arranged for a photography session for us. ❤ I’m SO excited for that. We’ll share those pictures later, I’m sure. 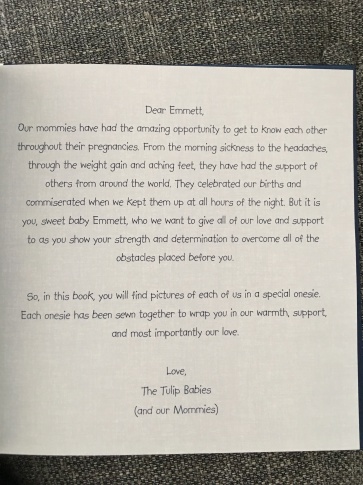 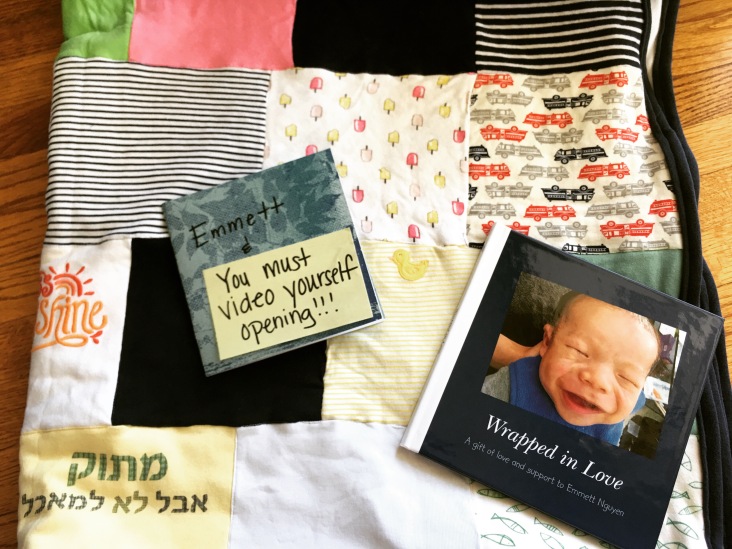