We started off the day yesterday with another blood draw – this one for something called a flow cytometry test they only process once a week. (We did a flow cytometry test when we went to Seattle Children’s Hospital, but the results came back inconclusive, so we’re hoping the NIH’s ability to process the blood same-day may yield more accurate results.) Monday’s blood draw didn’t go smoothly – they had a hard time drawing enough blood for all the tests ordered – so they spent some time prioritizing all the tubes/tests in case it happened again. Two hours in phlebotomy later, they were able to get as much as regulations allow. (They are allowed to draw a certain amount per kilogram of weight.)

The rest of the day was spent with neurodevelopment, doing X-rays to allow them to gauge the “bone age” of his skeleton, and meeting with hepatology to discuss any past issues he’s had with his liver. (Patients with other CDGs like PMM2 often have issues with their liver, so they want to document whether PIGA patients also have that issue. As of now, at least, it doesn’t seem to be a concern.) The hepatologist mentioned wanting to conduct a fibroscan (a noninvasive way to test the stiffness of your liver), so we ended getting that done today. 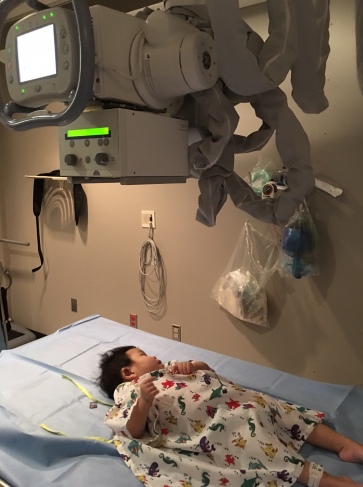 Emmett was pretty okay with the X-rays… until we had to pull his arms straight out.

The X-ray technician at work.

Yesterday was probably the “lightest” day of the week, so we went home early, rested and hung out at the Children’s Inn for the rest of the night.

The outside of NIH’s facility 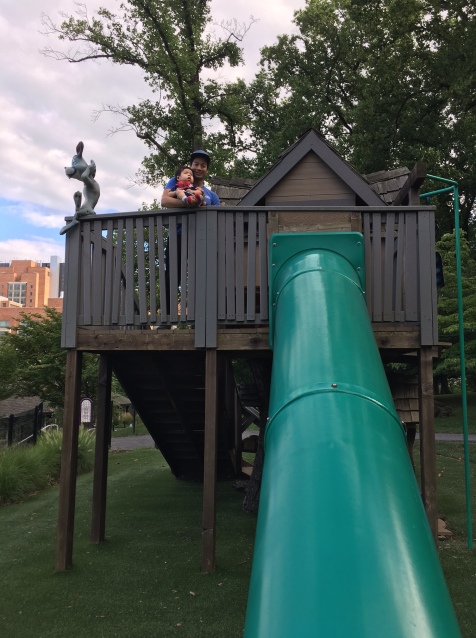 Each room is assigned a personal fridge with a code

Today was a different story. Starting at 8 a.m., we went from echocardiogram to EKG to abdominal ultrasound appointments, then had a small break before meeting with Hematology, Neurology and Immunology.  (We also had the fibroscan completed somewhere in the middle of all that, where we verified that his liver seemed okay for now.) Based on Emmett’s condition, we were probably most interested in meeting with Neuro and Immunology, but the other tests are needed so they get a good baseline for PIGA patients. Much more to come on the feedback they provided.

Happily waiting for our first appointment of the day 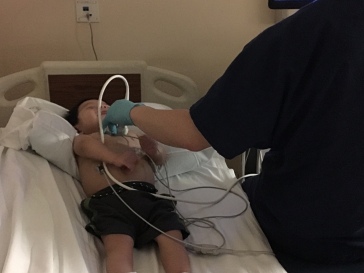 His happiness expired about 20 minutes into the echo

We ended the day by talking to a team of physical and occupational therapists and a physiatrist. They asked about the therapies Emmett is getting at home, and made recommendations for medical equipment we might need now (or in the near future). For example, bathing equipment we might need when Emmett becomes too heavy to lift in and out of a bathtub, or a stander that will help him build strength in his legs. They also suggested engaging a speech therapist now, so he doesn’t lose the muscles he’ll need to talk.

I haven’t really given too much thought on what we’ll do once Emmett is no longer small enough to carry around. I guess we’ve been focused on the immediate need and trying to develop a treatment plan for him. And maybe it’s a reality check I don’t want to have yet… thinking about Emmett never learning to take his own steps. It feels almost easier to get caught up and preoccupied with the day-to-day things we need to take care of… instead of planning for an uncertain future. Anyway, we have two more busy days ahead of us before we hop on a plane back. Good night!