This week, we’re back to UCLA Mattel Children’s Hospital to start Emmett on the ketogenic diet, which is basically a stricter/modified Atkins diet (high fat, low carbs). No one is really sure why the keto diet has been proven to show improvement in some types of medication-resistant epilepsies, but it has helped many babies/kids. It also improved the symptoms of another child with a PIGA gene mutation, though that child had a different variation of the gene mutation and his symptoms were less severe (not including the global developmental delay that Emmett has).

Before starting keto, they need to do a series of blood labs and urine tests, so we completed those earlier in the year. It takes 3-4 weeks to get the test results back, so if you’re thinking about doing keto for your child, FYI… you’ll want to make sure to get these done as soon as possible. To start the diet, UCLA wants to admit you for 4-5 days so they can keep an eye on vitals. There’s a long list of potential side effects, which includes acidosis and getting kidney stones. So it’s something they like to monitor. With Emmett in particular, his pseudo-obstruction and being able to tolerate the feeds is a concern, so that’s another thing they are keeping an eye on.

Anyway, I thought I’d document our experience with introducing keto to help pass the hospital time and for anyone curious about how this works.

Day 1 – When we have a planned admission to the hospital, they call us around 9 a.m. the morning of to let us know when to come in. (We end up waiting around for 3-4 hours for a bed to open up, which doesn’t really make sense… trying to figure out how we can avoid that in the future.) He started his first keto feed at 7 p.m., which for now is a 1:1 ratio of keto formula and his regular Similac formula plus water. We’ll then go 2:1 and 3:1 over the subsequent days. He will also need to do blood sugar tests (heel pricks) 3 times a day and blood draws once a day. They also want to check his ketone level, so they’ve asked us to put cotton balls in his diaper that they can then draw urine from to test. (You just stick and syringe into the wet cotton ball and pull up… who knew?)

The other thing we just found out was that when you’re on the keto diet, most liquid medications aren’t allowed because they have too many carbs. So we need to switch all five of his meds into pills that can be crushed and mixed with water.

Day 2 – Based on last night’s labs, he appears to be slightly acidotic (low pH levels), so they are starting him on a medication solution (bicitra) to help manage that and prevent kidney stones. Everything is going well with the feeding so far, though his stomach looks a little big. Blood sugar levels are okay at the low 80s; anything in the 50-80s range is considered okay while on keto. His morning blood draw went well thankfully – only one try needed. Today I got the full keto diet overview and got a tutorial on how to weigh and measure out the KetoCal, formula and water. Going on keto with a g-tube for a baby is, in general, easier than with an older child or someone who eats by mouth because then you need to get various ingredients and worry about the taste. Like with all treatments, it’s up to the parents to weigh the pros and cons.

We started the 2:1 ratio for his 7 p.m. feed since he was doing well with the 1:1. His ketone level is around a moderate right now. (Their goal is to get it to the moderate/large range.) His liver enzyme levels are concerning them a little, so that’s something to keep an eye on. (We’re not sure what his elevated numbers mean yet.)

Day 3 – The doctors decided that they’ll get him stable on the 2:1, then work to get him to the 3:1 ratio as an outpatient. (So best case scenario, we’ll be out by Friday!)

The blood draw this morning also went well – we asked for the same phlebotomist. 😊 (I hope she’s working the next two days.) They are doing some extra tests to see if they can figure out why his liver enzymes are high. His blood sugar has started to dip down into the low 60s, which is still fine but something to keep measuring to ensure it doesn’t go below 50. (If it does go too low, there are things to try, like giving him 100% juice to get his sugars back within a normal range.)

Otherwise, today is just a “wait and see” day. Make sure he’s tolerating the 2:1 ratio okay, and practice checking ketone levels and making the keto formula. While in the hospital, we get a steady stream of people coming in to check on us and him – the neurology team, the keto diet team, GI, the dietician, case managers and of course the nurses and care partners. 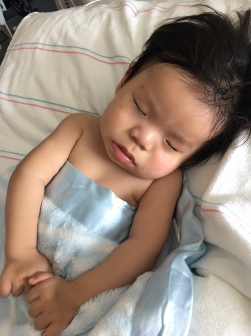 The three things that go into the keto diet formula… we’re slowly adding more KetoCal until we get to the 3:1 ratio.

A scale to measure all the ingredients since it has to be EXACT. 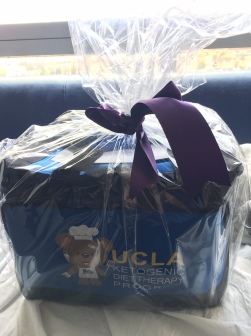 A kind mother donated one of these to each family starting keto. Comes with a cooler, scale and giftcard. Super thoughtful!

Day 4 – Same routine in the morning… blood draw, then talk to the various doctors following Emmett. Late morning, I got some bad news. Emmett’s bicarb (CO2) level was too low (at 12), meaning they would need to start an IV to give him the amount of bicitra he needed. A range of 23-30 is the norm, but numbers as low as 15 are “okay” if you’re on keto. Anything lower is dangerous. (Long term low CO2 levels could be damaging to his kidneys.) A little past 1 p.m., they attempted (five times) to put an IV in. (Emmett is a very difficult person when it comes to drawing blood or doing an IV, which we always warn the doctors. If at all possible, we try and push for an ultrasound guided IV, but there usually aren’t many people around who know how to do that. Ugh… blood draws are the devil. Sometimes I need to help hold him down because he writhes in pain, but sometimes I need to excuse myself because I can’t bear to see him scream. ☹) So suddenly I was faced with a tough decision – do I approve a PICC line so they can get him the bicitra they need to continue keto? Or do we give up and start to wean him off? (PICC lines are typically reserved for long-term IVs because it involves a procedure where you need to weave a tube through a main vein near the patient’s heart. In this case, he would’ve also had to get sedated for this.)

Together with the keto team, we decided to give him a couple emergency bicitra solutions, then retest his blood. I agreed to allow them to try another peripheral IV if his levels dipped down to emergency status, but said I’d rather start weaning him off keto than insert a PICC line. So he got his blood drawn (eighth prick of the day… poor guy ☹) and we waited to see what the results were. Thankfully, they were back to acceptable levels meaning we’d move forward with the diet! The doctors were slightly surprised the oral bicitra worked, but I guess every person reacts differently. Anyway, crisis averted. Hopefully tomorrow goes better.

Day 5 — The blood draw today went smoothly and his bicarb level still looks okay thankfully, so we’re able to avoid an IV for now. The GI team requested an abdominal ultrasound just to make sure everything looks okay (especially in his kidneys and liver) so that was completed this morning and also came out normal. 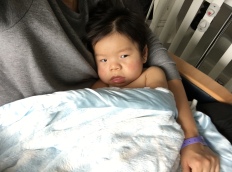 I forgot how tiny he still is, though he’s grown a lot over the past 5 months!

The hospital tries to keep the kids entertained, like this music therapy group that comes sometimes. We heard them down the hall singing Taylor Swift. 🙂 They decided on the Beatles for us. ❤

He’s always pretty pleased with himself after he has a large poop.

Ultrasounds > Blood draws. He actually dozed off for a few seconds during the abdominal ultrasound.

Day 6 — His bicarb levels were still good this morning, so we got cleared for discharge! We don’t need to check his blood sugar at home, but they did ask us to continue checking the ketones in his urine twice a day until we’re positive it’s stable. (It’s common to have ketone levels high initially, then drop off after the first few days.)  We’ll be going back in two weeks for labs, and in one month for a visit. The plan is to do another EEG in three months to see if the diet has helped his brain activity.

The week ended up going relatively well, aside from the bicarb level scare. I’m so glad we were able to escape without doing an IV (and especially a PICC line) and that we were able to continue trying out the diet. It’s harder logistically but hoping it’ll pay off somehow with Emmett’s development.

We’ll keep y’all in the loop on any differences we see! Thanks for following along. =)